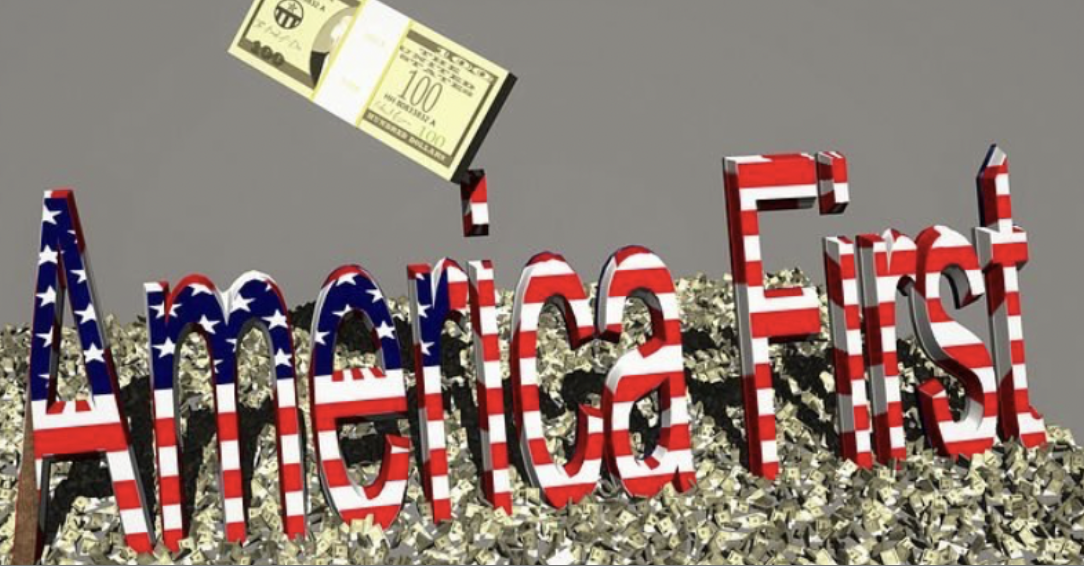 I get Democrats doing it, of course.  They’re nigh universally awful and irredeemable.

Republicans are only mostly awful.  But the many awful ones drive most DC GOP policy.  And with Trump barely in the rearview, the Awful Rs are looking to (re-)establish as much America Last policy as possible.

America First policy helps and pleases We the People – very often not the billionaire and millionaire donors.  There’s very little to no money for DC officials in America First policy.  No huge campaign contributions while running for office.  No extravagantly luxuriant gigs after leaving office.

Just the satisfaction of a job well and properly done.  Which banks don’t accept as deposit.

In which we described what Trump inherited – and reversed:

“(D)ecades of bad government policy drove millions of companies either out of business – or out of the country.

“Our stupid, unilateral trade policies were a titanic contributor to the mercantile exodus to foreign lands.

“A company that relocates from the US to anywhere else – becomes the beneficiary of those countries’ protectionist policies.

“Meanwhile, we imposed virtually no tariffs or import limits on anything from anywhere.  Giving our businesses a really stark choice:

“Stay in the US and pay through the nose to gain very limited access to every other foreign country.

“This was not a difficult decision.  Businesses left by the millions.  And took their jobs with them.

“And as a result, these foreign-based US companies formed the financial and ideological core of what became the massive, bipartisan, multitudinous DC Globalist Trade Lobby.

“The DC Globalists have spent billions of lobby dollars.  Working to ensure the US did nothing to defend itself against the rest of the planet taking mass advantage of US.

“They do nothing against – and even lobbied for – more US government spending, taxes and regulations.  Because why not?  They don’t have to pay the price.  But their US-based competitors do.

“All the while, they flood the US market with subsidized, unimpeded cheap stuff.  With which our domestic producers can not possibly compete.

I have been particularly particular about protecting US farmers and ranchers.  Because before you can take your China-made prescriptions or watch your China-made television – you gotta eat.  Ensuring we maintain a robust domestic food production system is a national security imperative.

When the excrement hits the global fan – and it will, very soon – I do not want to be relying on imported nourishment.

Our decades of idiotic trade policies have made domestic food production ever more difficult.  For all of the reasons listed above.  We’ve for decades mass-assaulted farmers and ranchers with idiotic tax, regulatory – and trade policies.

And now that Trump is out, there are DC Republicans looking to undo what little sensible farm-trade policy is left standing.

And it is actually a bipartisan America Last effort.  Because it is bipartisan DC policy to ensure Americans are screwed in every way possible.

The US sugar program is not ideal from a conservative perspective.  But it is one of the only things that actually assists domestic food production at all.  Or at least buttresses it against the decades-worth of idiotic policies pushing against it.

That’s international chicanery,  Then Mexico abuses our neighborly trade policy with them – and helps the mass-subsidizers mass-dump the subsidized sugar into the US.

Which violates US trade law.  The US Department of Commerce calculated Mexican subsidy and dumping margins to be a titanic 80%.

Our farmers have to compete and try to sell at a profit – while being massively undercut by these massive subsidies from multiple countries.  It is a patently absurd proposition.

Unilaterally ending our relatively TINY sugar program is an even more absurd proposition.  It is an infinitesimal drop in the international bucket.  It would be asinine to remove the only sandbag set against the flood of mass-subsidized sugar.

You know what makes actual sense?  Continuing Trump’s efforts to get government out of all sides of the trade market.  You know, actual free-and-fair trade.  Less government – everywhere.  Which should always be our goal – when their government screws US.

We’ll get rid of our tiny program – when they get rid of their giant theirs.  Yes, please.

Wanting to unilaterally remove the last tiny bulwark against foreign mass-cheating – turns Matthew 7:3 on its head.

We’re masochistically fixating on our speck – and ignoring their logs.