Exit Leahy: One of the Worst Men for the US in US History 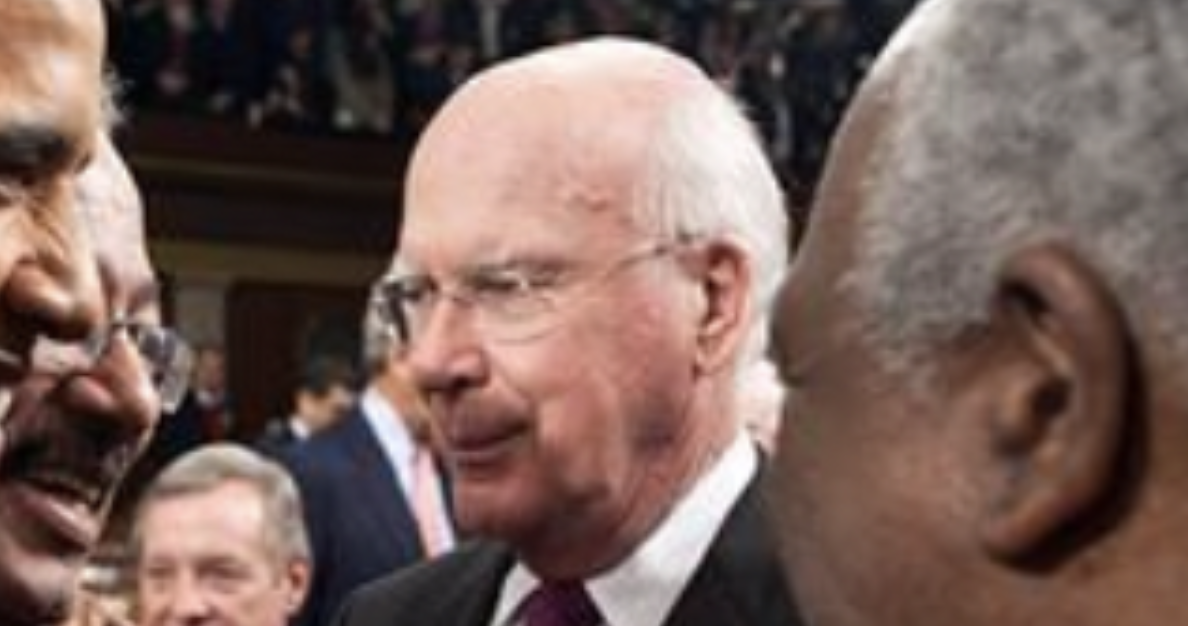 Vermont Democrat perma-Senator Patrick Leahy is FINALLY leaving office.  We should take a moment to examine his nigh-eternal DC existence.  Because it is a quintessential example of A LOT of what is wrong with DC.

Leahy was born in 1940 – before World War II began.  He was first elected to the Senate in 1974 – during the only, truncated Gerald Ford Administration.  That was TWELVE Administrations ago.

Prior to Leahy’s near half-century in the US Senate, he worked for…government.  Although in a capacity with some actual value – as a prosecutor.  That eight years was preceded by less than two years – right out of law school – working at the law firm headed by…then-Vermont Governor Phillip Hoff.

The takeaway being?  Leahy as an adult almost NEVER worked in the private sector.  And even that very brief private time – was government-related.  If your law firm is run by the governor?  That’s government-related.  (I wonder if the firm received any government business whilst its lead attorney ran the state?)

The takeaway being?  Leahy spent a near half-century lording over a private sector economy with which he has almost no actual experience.

Leahy’s interminable tenure in DC was almost entirely awful – and mostly known for two things: Judges and Intellectual Property (IP).  Shocker: He was awful on both of them.

Which is exceedingly bad news.  Because each has ramifications for the nation for many decades.

Judges and Justices get lifetime appointments.  So awful, activist appointees can do decades-worth of damage to the nation – including for decades after they’re gone.  And originalist appointees can reverse at least some of that damage.  Leahy always championed the former – and went all-out to destroy the latter.

Leahy was a LONG-time member of the Senate Judiciary Committee – and served for a very long time as its chairman.  He was not a noble steward of the judiciary and its confirmation process.  He was a terrible, hyper-partisan hack.

“Pat Leahy is the meanest, most partisan, most ruthless Democrat in the Senate….

“(H)e was a major tormentor of Robert Bork during those awful hearings….In fact, he was responsible for one of their moments of highest drama.

“He scolded Bork for doing insufficient charity work while a professor at Yale, and recited the fees he earned as an outside consultant during the years 1979 to 1981.

“Responded Bork, ‘Those are the only years I ever made any money in consulting.’ He continued, emotional, ‘There was a reason to get money, and I don’t want to get into it here.’

“Leahy acknowledged that the judge had his reasons. Then Sen. Gordon Humphrey, a Republican, broke in, saying, ‘Judge Bork, this is a very personal question, and if you prefer not to answer it, by all means do not — but were those years [ones that] coincided with heavy medical bills in your family?’  Bork spoke one syllable: ‘Yeah.’

“The bills to which Humphrey had referred were for Bork’s first wife, Claire, who died in December 1980. This was not only a moment of high drama, but one that turned the stomachs of many of those watching….

“Bob Bork would have been a great Supreme Court justice, and the American people did themselves a terrible disservice by electing to the Senate the kind of men who could not abide him on the Court.”

Democratic Racism: The Real Reason Behind the Borking of Estrada

Leahy’s IP record is no better.  And is, in fact, probably worse.

Bad IP policy damages the economy for many decades after its implementation.  Including for decades after you make corrections to the original awfulness – if you can ever repair it at all.

And even after you correct the bad policy, you are still years away from any possible new IP creation.  Because you have to start the R & D clock all over again – and start running again from a dead standstill.  Without a lot of the players and coin you once had – because they’re long gone to more hospitable climes.

The Senate Subcommittee on Intellectual Property – is a subsidiary of the Judiciary Committee.  Leahy was on that subcommittee for many years as well.  The results were…not good.  Which, of course, hasn’t stopped Leahy from bragging about them:

“Senator Leahy was the lead author of the Leahy-Smith American Invents Act (AIA), which was signed into law by President Obama on September 16, 2011.  Senator Leahy worked for more than six years to craft consensus legislation to reform the nation’s antiquated patent system, which had not been updated in nearly six decades.”

DC, more than any other place on Earth, ignores the truism “If it ain’t broke – don’t fix it.”

There’s a reason we hadn’t “reformed” our patent system for six decades.  Because it had made US the most successful country in the history of the planet.

From 1951-2011, the US invented hundreds of millions of things the rest of the world spent tens of trillions of dollars purchasing from us.  That sixty years was by orders-of-magnitude the most productive and successful period of any people in any nation in human history.

“(L)itigation experience was required to understand the damage of the PTABs and since less than 2.3% of patents are ever litigated, only a very small subset of inventors have ever been forced by infringers to defend their patent rights. Of those, an even smaller subset knew about the provisions in the AIA, could project the damage those provisions would cause….

“The AIA turned the patent system on its head, and today inventors can scarcely do anything with their patents. I’ve been to dozens of inventor clubs in the last six months talking about patent reform. Inventors are walking away from the patent system en mass, which is exactly what the large multinational corporations that supported the demise of the American patent system wanted.

“These independent inventors can’t license their inventions, which means they can’t fund their companies to continue to research, develop and commercialize their inventions. This was the goal of the large multinational corporations….

“If inventors can’t make money by inventing, they stop… and that is what is happening all across America. Some inventor support companies have laid off as much as 70% of their staff. The canary is not only unconscious, it is burning in flames threatening to ignite the entire coal-mine….

“Entrepreneurial inventors and the start-ups that rely on the innovation generate most of America’s new jobs and the collapse of the patent system is a major reason why America’s real job market (as opposed to the fiction delivered monthly by the Department of Labor) is stagnant and our economy is not growing….

“The AIA is a certified disaster, and PTAB procedures are the core reason why.”

The AIA and its PTAB have now been screwing us for a decade.  During which time US IP talent and money has flooded out of the US.

These extraordinarily awful results?  Are the “reforms” about which Leahy is bragging.

And they make up what is almost certainly the largest part of his extraordinarily awful legacy.